Jesse Alemán, UNM associate professor of English, presents the 2010 Richard W. Etulain Lecture, “From Union Officers to Cuban Rebels: The Story of the Brothers Cavada and their American Civil Wars,” Thursday, Feb. 18, at 5:30 p.m. in the UNM Student Union Building, Lobo A and B. This event is free and open to the public. A reception will follow the lecture.

Alemán joined the faculty in 1999 and his scholarship and teaching cover two inter-related fields: nineteenth-century American literature and the emergence of Mexican America. His work focuses on the literary histories and national identities forged in the U.S. Southwest after the 1846-1848 U.S.-Mexico War. He has published more than a dozen articles in scholarly journals and edited collections.

Alemán edited and reprinted Loreta Janeta Velazquez’s 1876 autobiography, The Woman in Battle, which recounts the adventures of a Cuban woman who cross-dressed as a Confederate soldier to fight in the U.S. Civil War; and he co-edited Empire and the Literature of Sensation, an anthology of nineteenth-century popular literature about U.S. imperialism in Mexico and Cuba. He is working on “Wars of Rebellion,” a book that places nineteenth-century Hispanic writings about the U.S. Civil War within a context that considers related wars of rebellion in Cuba and Mexico.

The Etulain Lecture was conceived by Calvin P. Horn and David Holtby to honor the professional accomplishments of UNM History Professor Richard W. Etulain. The endowed lecture series is presented by UNM faculty members whose scholarship contributes to the regional history of the Southwest. The series is funded by the C. Ruth and Calvin P. Horn Endowment.

For more information on the 2010 Etulain Lecture, or other events sponsored by the Center for the Southwest, contact Rebecca Vanucci at 277-7688 or e-mail, cntrsw@unm.edu.

This post was originally posted on UNM Today here.
Posted by English at UNM at 11:55 AM No comments:

Article: In search of Stieg Larsson

BBC Magazine has published an interesting article on the controversies around the works of Swedish author and international best seller Stieg Larsson. Larsson's trilogy, The Girl With the Dragon Tattoo [Men That Hate Women, in Swedish], The Girl Who Played With Fire, and The Girl Who Kicked the Hornets' Nest [The Castle in the Air That Blew Up, in Swedish], were all published after his death in 2004. Several biographies are due out this year, one of them causing a stir with its suggestion that Larsson was not the leading journalist his myth has suggested. Far more inflammatory however, are comments made by a colleague of Larsson's in which he alleges that Larsson was incapable of producing the works published in his name.

You can read the entire article here.
Posted by English at UNM at 7:07 AM No comments:

Email ThisBlogThis!Share to TwitterShare to FacebookShare to Pinterest
Labels: articles, of interest

The reclusive author of Catcher in the Rye died of natural causes at his home in New Hampshire. You can read the BBC article on his life and death here, and the BBC obituary here.
Posted by English at UNM at 3:03 PM No comments:

Genesea Carter  has been selected to Who's Who Among Students by UNM's Student Activities Office.  Genesea is recognized for her excellent academic work, her citizenship and service to the UNM community, and
particularly for having proposed and organized the First Annual Celebration of Student Writing.

Congratulations, Genesea!
Posted by English at UNM at 2:28 PM No comments:

We're excited to share with you the details of the 2010 Kenyon Review Short Fiction Contest, for writers under thirty. We'd be grateful if you would forward this e-mail to any interested writers you know.

KR will be accepting electronic submissions February 1st through February 28th, 2010, through the Short Fiction Contest page of the KR website. Louise Erdrich will be the final judge. The winning story will be published in The Kenyon Review, and the author will receive a scholarship to the 2010 Kenyon Review Writers Workshop, June 19-26th, in Gambier, Ohio. (Scholarship covers tuition, room and board expenses.) There is no entry fee for submission. Please direct questions to kenyonreview@kenyon.edu.

Here are the full contest details:

The final judge will be Louise Erdrich, winner of the 2009 Kenyon Review Award for Literary Achievement. Erdrich is the acclaimed author of the novels Love Medicine, The Beet Queen, The Last Report on the Miracles at Little No Horse, and The Plague of Doves, as well as many others. In 2009, she published The Red Convertible: Collected and New Stories, 1978-2008.

Posted by English at UNM at 7:17 AM No comments:

After more than a year of construction, Mitchell Hall will be back in service for the Spring 2010 semester. We appreciate your patience as we have made many needed improvements to the facility.

Given the tight construction schedule for this project, you will notice that work by various contractors will continue for approximately a month into the start of the Spring Semester - including installation of final chalkboards and audio visual components in a few of the classrooms. However, temporary resources are being deployed and this should not be of major inconvenience to any of you. If you experience problems, please immediately contact Jep Choate (jepchoate@unm.edu) in the Office of the Registrar for assistance.
While the exterior of the building was left much the same, the interior of Mitchell Hall has been redesigned and refinished to provide a streamlined, more efficient and attractive teaching and learning environment. The following enhancements have been made to the classrooms:
Improved day-lighting and overall energy efficiency
New furniture for students and instructors
Enhanced teacher stations and podiums
New chalk and white boards
Wireless internet, ceiling mounted digital projectors and screens
A separate computer classroom equipped with 26 workstations
Overall building improvements include:
A new deli, with indoor and patio seating
Upgraded restrooms
A re-located MTS (Media Technology Services) satellite for classroom support located across from the Deli
A walk-up computer counter
Small informal seating areas located throughout the building
We welcome your feedback on this important project and hope that you will keep in touch as you teach in this new facility. In the coming months, we will be conducting user surveys as part of our post-occupancy review. We hope that you will take the time to tell us what we have done right or the things we could do better in the future.
Posted by English at UNM at 7:31 AM No comments:

Patricia Anaya, beloved wife of emeriti Professor Rudy Anaya, passed away just recently. The Department has many fond memories of Patricia over the years, and we send our condolences to Rudy and family.  A celebration of her life will occur in a few weeks, and we will provide the details for those who would like to pay their respects to this amazing woman.
Posted by English at UNM at 6:01 AM No comments: 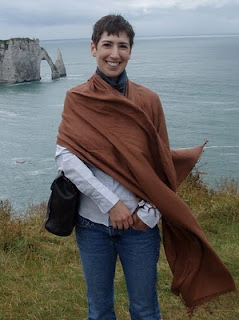 Marissa Greenberg, Assistant Professor of English, has received an National Endowment for the Humanities (NEH) grant to work on her book project, entitled Metropolitan Tragedy, 1567-1667.  In addition, an article version of the book chapter on tragedies of tyrants, parts of which Professor Greenberg presented in her recent departmental talk, has been accepted for publication by Renaissance Drama.
Posted by English at UNM at 12:18 PM 1 comment:

Working collaboratively with someone and need a file sharing solution? DropBox might work for you, and it's free (the academic's favorite price).

Check it out here.
Posted by English at UNM at 6:41 AM No comments:

Email ThisBlogThis!Share to TwitterShare to FacebookShare to Pinterest
Labels: Resources

Trying to get your text to behave itself in InDesign? Check out this tutorial from Layers Magazine and learn the basics of text formatting and text wrap.

Text Wrap and Text Formatting in InDesign
Posted by English at UNM at 8:58 AM 2 comments:

Typophile.com
Posted by English at UNM at 7:46 AM 1 comment:

Email ThisBlogThis!Share to TwitterShare to FacebookShare to Pinterest
Labels: inspiration, of interest, Resources

Gary Jackson (MFA 2008)has won the 2009 Cave Canem Poetry Prize, which means not only that his manuscript, "Missing You, Metropolis," will be published by the University of Georgia Press in 2010, but also comes with a $1,000 cash award.

Congratulations Gary!
Posted by English at UNM at 10:42 AM No comments:

Texas Tech University houses the internationally known Southwest Collections and the Vietnam Archives. Spring in Lubbock is mild and sunny.

American Studies as transnational practice not only raises questions on the changing roles that the United States has played as a great power in the global arena since the late nineteenth century, but also calls attention to its own disciplinary premises, interests, and imaginaries in relation to area studies and comparative literature. As American Studies has recently intervened in U.S. exceptionalism and neoliberal capitalism in its critique of discourses that vary from “manifest destiny” to “market democracy,” it also foregrounds its own formation as a product of the Cold War and its renewed influence in the post-socialist regimes in China, Russia, and East Europe. Meanwhile, with new paradigm shifts in transnational and global studies that encompass transoceanic, hemispheric, and planetary consciousness, how does American Studies negotiate and reconfigure its own field imaginaries and boundaries? If Hemispheric Studies highlights the issue of “the Americas,” how would its critical disposition “provincialize” American Studies? If the westward movement was central to U.S. nation-building and the national imaginary, how do the generations of Mexican presence in the Southwest as well as more recent northward migrations of Latinos/as impact the U.S. consciousness as simultaneously old and new national narratives? If Trans-Atlantic movements have informed and reshaped U.S. literary, cultural, and historical experiences, then what new possibilities would Trans-Pacific movements pose for American Studies in the twenty-first century? What are the new opportunities and challenges if we reconsider U.S. literature, history, and culture in planetary terms?
This symposium invites presentations that investigate the theory and praxis involving American Studies in transnational contexts at various historical junctures, and seeks projects that explore specific cases in U.S. history, literature, and culture with global dimensions and implications. We welcome proposals that examine American Studies from U.S. regional locales and global sites as well as abstracts that reconsider U.S. historical and cultural experiences in transnational and planetary frameworks.
Topics may include but are not restricted to the following:

-- Rethinking the Boundaries among American Studies, Area Studies, and Comparative Literature
-- Empire, Race, and Trans-Atlantic Studies
-- Race, Gender, and Class in Transnational American Studies
-- The Local and the Global in Trans-Pacific Studies
-- Borderland, Natural Environment, and Planetary Consciousness
-- Border Crossing and Critical Cosmopolitanism
-- Border Literature, Chicano/a Theory, and Hemispheric Studies
-- American Studies and Post-socialism in China, Russia, and Eastern European Countries
-- The Trans-Pacific Movement of Asians in Diaspora
-- Wall Street and the Future of “Market Democracy”
-- Westward Movement and U.S. Southwestern Literature
-- Colonialism and Neocolonialism in Asia, Africa, and Latin America
-- Global and Local Wars: Displacement, Migration, and Expulsion
-- The Vietnam War and Vietnamese in Diaspora
-- Transnational Feminist and Queer Studies
-- Postcolonial Studies and beyond
-- The Role of Spanish in American Studies
-- Transnational Cinema
Please send your one-page proposal and one-page C.V. by January 18, 2010
Posted by English at UNM at 3:07 PM No comments: