Karra Shimabukuro Publishes Advice on How to Thrive in Graduate School

PhD student Karra Shimabukuro has written a guest post for Grad Hacker, a resource for grad students. Karra’s post deals with how to “thrive” and not just survive in graduate school. It can be found here: http://www.gradhacker.org/2014/03/31/thrive-not-survive/
Posted by English at UNM at 10:29 AM No comments: 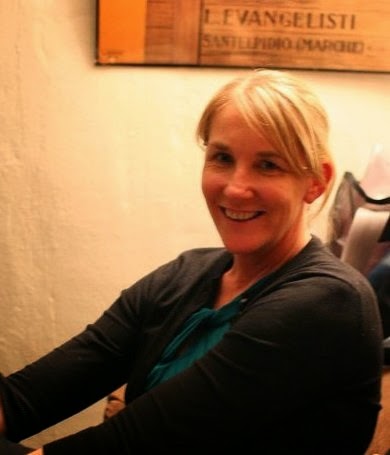 Dr. Cristyn L. Elder has been selected by UNM's Center for Teaching Excellence as one of eight faculty from across the disciplines to be a UNM Teaching Fellow during the 2014-15 Academic Year. Fellows will investigate carefully-defined teaching challenges by examining the latest research on teaching and learning in one's discipline, design a teaching innovation, and collect and evaluate evidence of student learning. Dr. Elder aims to work with faculty outside the English Department in an effort to increase undergraduate student success in designated "killer courses" (i.e., those with high fail rates). Specifically, Dr. Elder will be working with faculty in designing and implementing scaffolded class activities and writing assignments that align with disciplinary course content in an effort to help students successfully address course goals and learning outcomes while developing their writing skills. Dr. Elder's overall research question is the following: Does an increased focus on writing as it relates to course content improve students’ success rate in the course?
Posted by English at UNM at 7:02 AM No comments:

Oliver Baker, a PhD student in American Literary Studies, has been admitted to the School of Criticism and Theory at Cornell University!

A six-week summer program, the School of Criticism and Theory was founded in 1976 by a group of leading literary scholars in the conviction that an understanding of theory is fundamental to humanistic studies. The SCT offers faculty members and advanced graduate students in the humanities and social sciences a chance to work with preeminent figures in critical thought — exploring debates in and across literary studies, political theory, history, philosophy, art, and anthropology; examining the role of ideological and cultural movements; and reassessing theoretical approaches that have emerged over the last fifty years.  More information about SCT is available here: http://sct.cornell.edu/

Congratulations to Oliver—we are thrilled that he will be representing the UNM Department of English at SCT!
Posted by English at UNM at 1:33 PM No comments:

UNM English major Christopher Bartlett has been admitted to Boston University’s MA/PhD program in English and American Literature! Chris has received a full graduate fellowship from Boston University, and he will begin graduate study this fall. He is currently finishing an Undergraduate Honors Thesis in the English Department here at UNM, under the supervisions of Prof. Daniel Worden, titled “‘An Exercise in Telemachry’: David Foster Wallace’s Infinite Jest and Intergenerational Conversation.”

Congratulation to Chris!
Posted by English at UNM at 10:07 AM No comments: 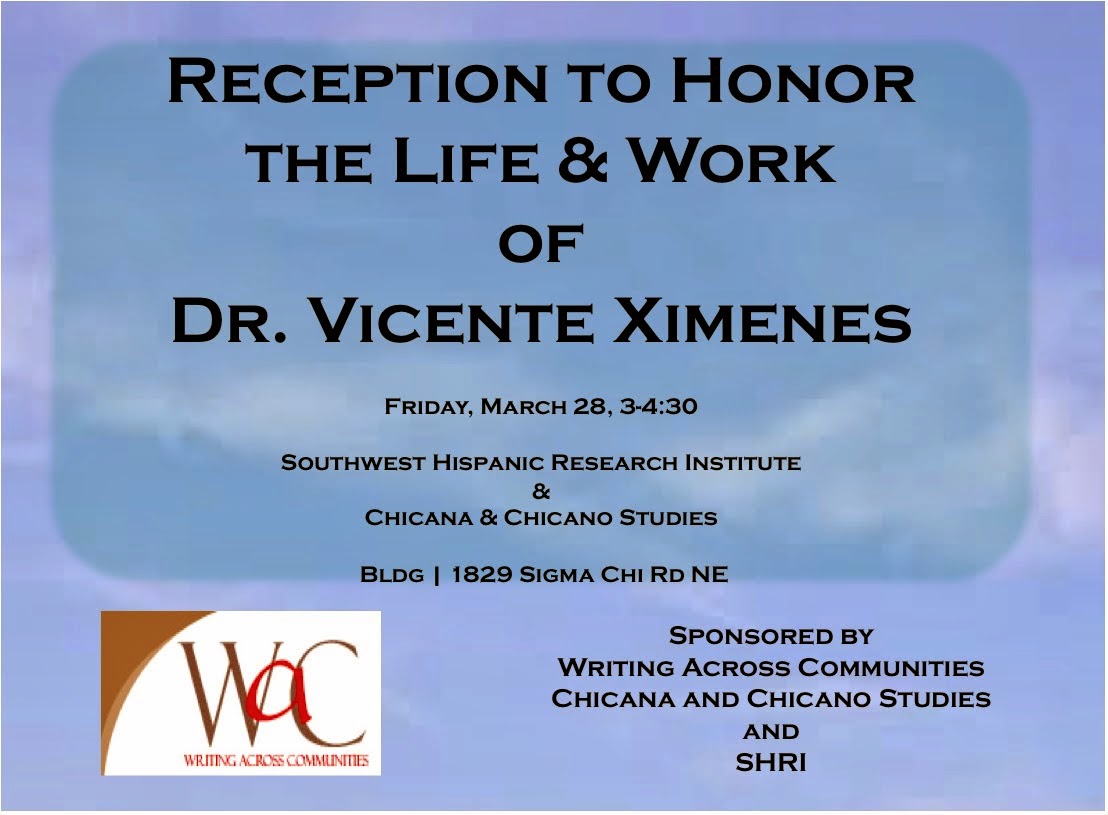 We hope that you can attend the Dr. Vicente Ximenes reception this Friday March 28th at the Chicana and Chicano Studies and Southwest Hispanic Research Institute building at 1829 Sigma Chi Rd NE from 3pm-4:30 pm. There will be food and drink and a memorial arranged for Dr. Ximenes. The reception is sponsored by UNM's Chicana and Chicano Studies Program, College of Arts and Sciences, Department of English Language and Literature, and Southwest Hispanic Research Institute.

For more information about Dr. Ximenes, to pay tribute to his legacy, or to donate to the Vicente Ximenes Scholarship in Public Rhetoric and Community literacy, visit http://www.unm.edu/~wac/scholarships/vicente-ximenes-scholarship.html.

Posted by English at UNM at 8:23 AM No comments: 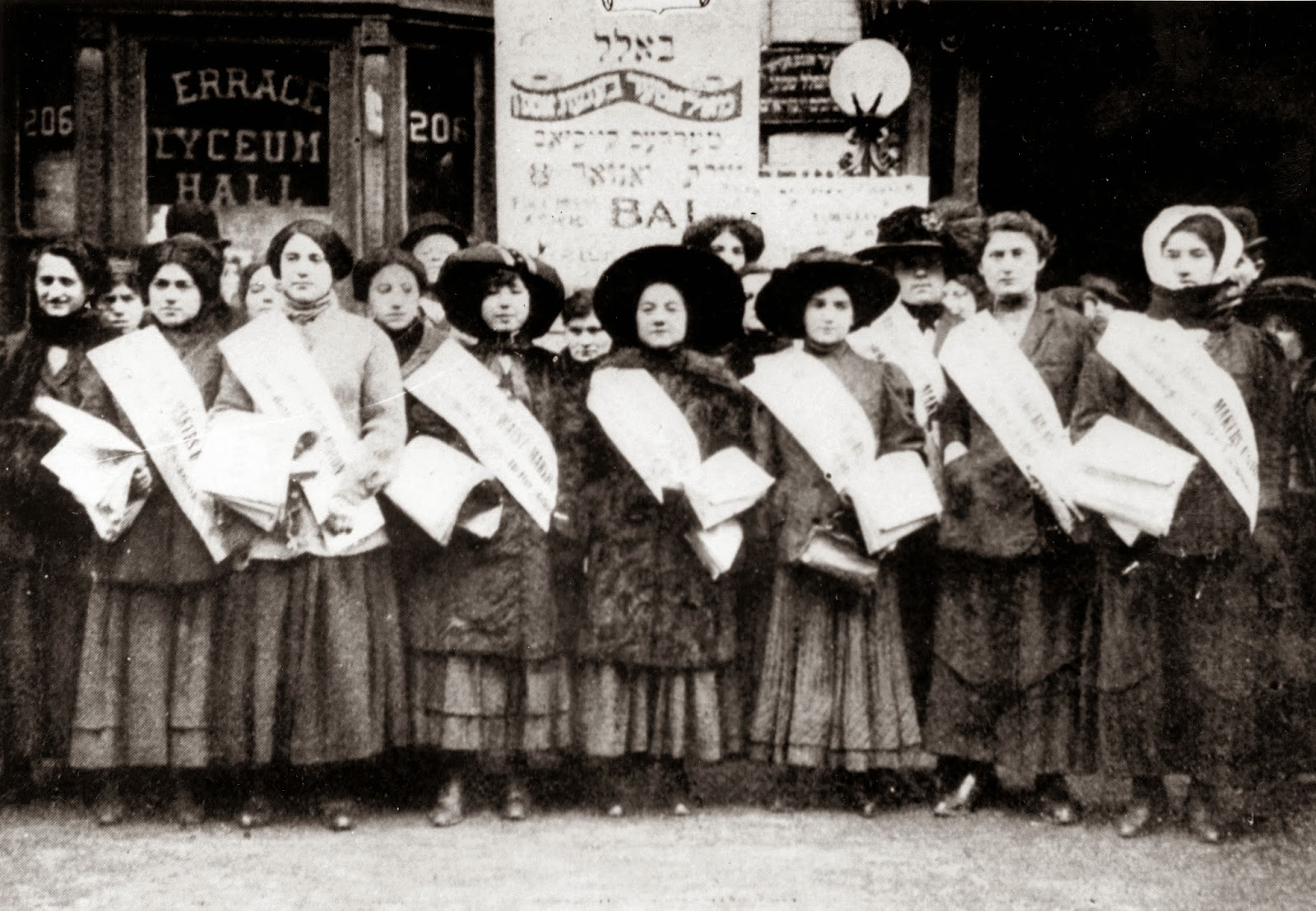 Dr. Bartolotta’s research focuses on the intersections of rhetoric and literacy. The questions that drive his research are: How and where do people learn rhetorical strategies? Further, how is rhetorical acuity related to literacy training? Joseph recently defended his dissertation titled “Laboring Literacy: Rhetoric, Language, and Sponsors of Literacy in Workers’ Education in the International Ladies Garment Workers’ Union 1914-1939,” which is concerned with non-academic literacy in a professional context and argues that the acquisition of literacy itself constitutes a rhetorical act, as learners are trained by literacy standards that urge a certain rhetorical interaction with existing power structures.

Posted by English at UNM at 8:11 AM No comments:

Emilee Howland-Davis into a Bright Future

Emilee Howland-Davis has been accepted into the English PhD program at the University of Missouri at Columbia with a full assistantship and two fellowships: the Medieval and Renaissance Studies Supplemental Graduate Fellowship, as well as the English Department Fellowship. Emilee will continue studying Arthurian Literature in the context of magic. We will miss you, Emilee, and wish you all the best. Dr. Obermeier
Posted by English at UNM at 3:04 PM No comments:

Todd Ruecker has received a grant from the UNM Research Allocations Committee in the amount of $5,437 to fund his project titled "Linguistic Minority Students and Literacy Education in Rural and Small Town High Schools."  The grant will support Professor Ruecker's work this fall focused on literacy education in small town high schools and how it supports linguistically diverse students' transitions to college.
Posted by English at UNM at 10:44 AM No comments:

The Center for Regional Studies Hector Torres Fellowship supports graduate research and scholarship in the English Department directly related to the late Dr. Hector Torres’ fields, as well as the mission of the Center for Regional Studies. These areas include Chicano/a literary and cultural studies; theory (i.e. Marxism; post-structuralism; deconstruction; psychoanalysis; and globalization); film studies; and scholarship related to the mission of the CRS (including history; archival research; literature; and other interdisciplinary fields related to New Mexico, the US-Mexico borderlands, and the greater southwest).

The award amount ranges from $10,000 to $15,000 a year, depending on availability. Renewal is not automatic. The Fellowship is housed in the English Department but sponsored by the Center for Regional Studies. Fellowship funding pending final budgetary approval.

Qualified graduate student applicants must meet the above criteria; be graduate students in good standing (3.0 GPA or better); maintain full-time graduate student standing during the tenure of the award; and complete a CRS application, which includes a letter of intent; transcripts; resume; two letters of recommendation; and proof of enrollment. Preference will be given first to advanced doctoral students (post-exams); doctoral students in coursework; and advanced MA students. Highly qualified applicants to the English doctoral program in American Literary Studies will also be considered for the fellowship for recruitment purposes.

Submit all inquires and all application materials (in hardcopy) to Dr. Jesse Alemán (jman@unm.edu), Professor, Department of English.

For our first English Department Colloquium presentation of the semester, Belinda Wallace will present "'It is only she that brings them to any life:' Mapping a Meta-Colonial Feminist Space in Dionne Brand's Ossuaries."
Wednesday March 12 at noon, SUB Fiesta A.
Posted by English at UNM at 1:20 PM No comments:

Ana Ximenes remembers moving to Washington, D.C., as a child with her father, knowing very little English and sprinting from the school bus to her home because she was Mexican-American and different from the other kids in her neighborhood. “My dad felt sorry for me but said, ‘You have to fight back and stand up for yourself,’ and I’ve been doing that ever since then,” she said Saturday. It’s an attitude family members say Vicente Ximenes displayed throughout his life. The longtime grass-roots civil rights activist,scholar and White House appointee died Thursday night in Albuquerque at the age of 94.

Ximenes was renowned both in Albuquerque and on a national level for his work with the Agency for International Development (AID) in Panama and in Ecuador, he was a founding member of the American GI Forum chapters in New Mexico and was appointed to the Equal Employment Opportunity Commission by President Lyndon Johnson. He was instrumental in organizing the El Paso hearings, a summit with President Johnson in which the conditions of Mexican-Americans were highlighted, and the hearings led to widespread social change, said University of New Mexico English professor Michelle Kells.

Ximenes’ friend Armondo Lopez first met him in Panama working for AID, where the pair tried to improve education and economic opportunities for Panamanians. The group established credit unions for low-income farmers throughout the country. “He was dedicated and determined, his commitment – which I saw and understood much more later – to helping others was tremendous,” Lopez said Saturday. “There were a couple of instances where he got out of his sick bed and went to the office, maybe at the detriment of all of us, just to encourage us to keep on trying to make those projects we were involved in a success.”

Born in Floresville, Texas, Ximenes received a bachelor’s in education and master’s in economics from the University of New Mexico in the 1950s. He also received an honorary doctorate from UNM. One of his early projects, said Ximenes’ son Ricardo, was helping Albuquerque sanitation workers get showers after work. He went on to actively lobby for affirmative action and Mexican-American rights. During his retirement in Albuquerque, Ximenes remained politically active, heading his neighborhood association and fighting against the building of a nearby Wal-Mart. He also founded the Youth Conservation Corps in New Mexico, according to Journal archives.“There are millions of people that he helped who have probably never heard his name,” Ricardo Ximenes said. “He always believed in the dignity of humans, that was his driving force. He was a progressive thinker; he still kept up with local politics.”

A rosary will be held for Ximenes at French Mortuary, 10500 Lomas NE, at 6 p.m. Thursday, and a grave-side service is planned for 2:30 p.m. Friday at Mount Calvary Cemetery, 1900 Edith NE. The family requests donations be made to the Vicente Ximenes Scholarship in UNM’s English department.

Check donations can be mailed to:

Online donations can be made here: Vicente Ximenes Scholarship in Public Rhetoric and Community Literacy at:
https://www.unmfund.org/fund/vicente-ximenes-scholarship-in-public-rhetoric-community-literacy/
Tributes in honor of Dr. Vicente Ximenes can be sent to the: Vicente Ximenes Legacy Blog at:
http://vicenteximeneslegacy.blogspot.com/

Posted by English at UNM at 8:02 AM No comments: