Daniel Worden’s co-authored essay on “Postmodernism, Then” has been reprinted in Background Readings for Teachers of American Literature.

With chapters that address literary and social movements, questions of identity, the geopolitical aspects of American literature, and classroom approaches, Background Readings for Teachers of American Literature, Second Edition, provides an overview of changes in the field of American literary studies and a survey of its popular themes. The twenty-seven readings include important scholarship, critical essays, and practical ideas from working teachers. This professional resource offers support to instructors using The Bedford Anthology of American Literature.

More information about the book is available here: http://www.bedfordstmartins.com/Catalog/product/backgroundreadingsforteachersofamericanliterature-secondedition-patton
Posted by English at UNM at 2:47 PM No comments:

Andy Bourelle Publishes in Encyclopedia of Educational Theory and Philosophy

Posted by English at UNM at 9:43 AM No comments: 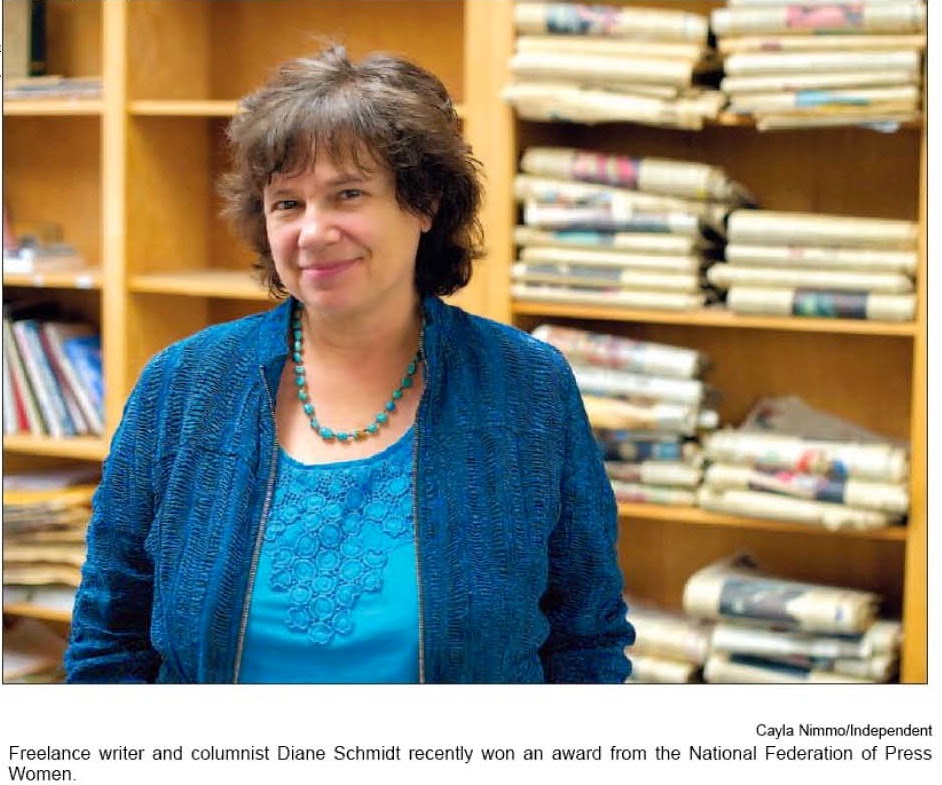 Diane Schmidt got her MA in Creative Writing from UNM, in Spring 2002. Her MA Thesis was The Collected Works of Earnestine Thebad.

Attached is an article from the Gallup Independent, June 24, 2014.

GALLUP - An Independent columnist exposed a con man working in New Mexico and won a top award from The National Federation of Press Women.

Diane Schmidt won the first place award for enterprise reporting from The National Federation of Press Women for her articles "Who you gonna call, Ghostbusters?" and "Con man who posed as Native fooled merchants, media" which both ran in the Independent.

The first of the two stories appeared in the Independent on April 20, 2013, as the spiritual perspectives column after Schmidt received an irate call from a Native community member. The individual stated that David Rendon, at the time known as David RedFeather, who had recently been featured in the Navajo Times as a Native American healer, promoter, and savior for the merchants of the Old Town business district and who had recently been elected president of the Old Town Merchants Association, was in fact not who he was claiming to be.

The individual claimed that RedFeather was not a Lakola healer as he was claiming and also had an extensive criminal record including a civil complaint in Ramah from 1998 where Rendon was accused of failure to pay rent. The first story didn't name Rendon explicitly because Schmidt could not get absolute confirmation to match the man to the police records.

Through further investigation, Schmidt uncovered an extensive criminal past for Rendon in Utah, Colorado and New Mexico and finally confirmed that it was indeed the same David Rendon. Schmidt reported that the man had conned around $50,000 from people that believed he was a successful businessman, healer, roadman and mystic. What he really was, was a crook, who would prey upon peoples vulnerabilities, taking their hard earned money and bouncing out of town before the boys in blue could catch up to him. The second of the two stories ran on the front page of the Independent on Aug. 21, 2013.

Schmidt submitted the stories to the New Mexico Press Women, where they won first place in enterprise reporting and advanced to the National Federation of Press Women where it also won first place for the same category. The judges commented on the story by saying the stories were a "Great example of enterprise reporting with impact for the community."


Diane says, "The story was a lot of work and cost ten times more time and money than I would ever get paid, as this sort of work always does, so this was sort of my 'reward.'

"The real payback was a call I got some months later from a gal who was helping Rendon where he had resurfaced in the Carolinas, and saw my stories online about him and I was able to advise her to contact the police there instead of her trying to 'save' him."
Posted by English at UNM at 9:32 AM No comments:

This review of Guernica,revisited was just published on Cultural Weekly, an ezine out of L.A. if you haven't had a chance to check it out, this gives you an idea. they also featured three poems from the book.

In April, Marisa Sikes, PhD in Medieval Studies, accepted a tenure-track position at Austin Peay State University in Clarksville, Tennessee, one of the Tennessee state universities. She will be joining their faculty as the Middle English specialist with secondary responsibilities in History of the English Language and World Literature. We wish you all the best, Marisa, and a wonderful career.
~Dr. Obermeier
Posted by English at UNM at 2:38 PM No comments:

The Department is pleased to announce . . .
Benjamin Franklin Independent Book Awards for Popular Fiction Gold Winner:
The Old Man’s Love Story, by Rudolfo Anaya, University of Oklahoma Press
This is just one of numerous awards and accolades our emeritus Rudy Anaya has received over the years.  Many kudos and good wishes to our good friend and colleague.

Posted by English at UNM at 3:24 PM No comments: