The editors of Present Tense: A Journal of Rhetoric in Society are proud to announce Volume 2.2 of the journal at www.presenttensejournal.org. Vol. 2.2 is a special and double issue of Present Tense that focuses on medical rhetoric and makes forays into gender and body rhetorics. The special issue features nine articles, a comprehensive medical rhetoric bibliography, an interview, and two reviews.

Present Tense is a peer-reviewed, blind-refereed, online journal dedicated to exploring contemporary social, cultural, political and economic issues through a rhetorical lens. In addition to examining these subjects as found in written, oral and visual texts, we wish to provide a forum for calls to action in academia, education and national policy. Seeking to address current or presently unfolding issues, we publish short articles of 2,000-2,500 words, the length of a conference paper.
Posted by English at UNM at 12:29 PM No comments:

Dan Mueller’s second collection of stories, Nights I Dreamed of Hubert Humphrey, has just been picked up by Outpost 19 Books. Outpost 19 is an independent publisher based in San Francisco and New York. Stay tuned for more updates. Until then, you could check out Outpost 19 at http://www.outpost19.com/

Ty Bannerman’s essay “The Exhibition” is a finalist for Midway Journal’s “Monstrosities of the Midway,” and will be published in the October issue of Midway Journal. He has also recently become the Food Editor for the Weekly Alibi.

Daniel Berger’s poem “Aliens in the Backyard” is forthcoming in the journal NewBorder Anthology: Criticism and Creation from the U.S./Mexico Border (newborder.org).

Publications:
“Mother’s Day Shouldn’t Be About Grief” essay on 40PlusWoman.com (May 12, 2012)
“intervals” poem published in A Year in Ink, Vol. 5 an anthology (2012)
“Mom’s Chicken Divan” essay on StyleSubstanceSoul.com (May 2011)
“Giving Voice to Your Prose” article in LP Creative Humans magazine (March 2010)
“Our House is Like Switzerland” short story published Bartelby Snopes (January 2010)

Awards:
2011 A Room Of Her Own Foundation Retreat Participant (partially funded and served as small group workshop leader)
2009 American Welding Society Image of Welding Award (for writing about women welders at: http://www.arc-zone.com/blog/carmenelectrode/category/new-rosies/)


Natalie Kubasek, a PhD candidate in English, with a concentration in American Literary Studies, has received the Center for Regional Studies Hector Torres Fellowship.

Ms. Kubasek joined the English doctoral program in Fall 2010 after earning her MA in English from Simmons College, in Boston, MA, and her BA in English from Whittier College, in her hometown of Whittier, CA. In 2011-2012, she garnered a Latino/a Graduate and Professional Student Fellowship sponsored by UNM’s El Centro de la Raza and the Title V Resource Center. 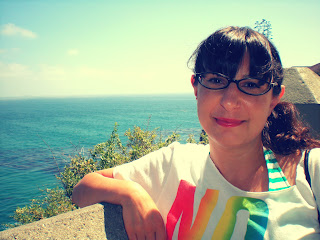 Her research focuses on Chicano/a literature, and as a CRS Hector Torres fellow, she plans to conduct research for her dissertation on Chicana feminism and cultural production, with an emphasis on theater and performance art. The study of Chicana theater and performance art, Kubasek maintains, is a rich yet untapped area of Chicana cultural production, and the fellowship will help her locate and access primary documents and resources housed in archives across the southwest; she also plans to locate and interview authors, performers, and playwrights significant to the development of Chicana theater.

The Hector Torres Fellowship, a $10,000-$15,000 stipend, was inaugurated by the University of New Mexico’s Center for Regional Studies in memory of the English Department’s slain colleague, Dr. Hector Torres.

The Center for Regional Studies Hector Torres Fellowship supports graduate research and scholarship in the English Department directly related to Dr. Hector Torres’ fields, as well as the mission of the Center for Regional Studies. Areas include Chicano/a literary and cultural studies; theory (i.e. Marxism, post-structuralism; deconstruction, psychoanalysis; and globalization); film studies; and scholarship related to the mission of the CRS, including history, archival research, literature and other interdisciplinary fields related to New Mexico, the US-Mexico borderlands, and the greater Southwest.
Posted by English at UNM at 6:59 AM 1 comment:

“The Manciple’s Prologue and Tale” in The Literary Encyclopedia (http://www.litencyc.com/index.php).

Finally, she has been elected president of the Medieval Association of the Pacific as well as TEAMS (The Consortium for the Teaching of the Middle Ages) that also publishes the Middle English Text Series (http://www.lib.rochester.edu/camelot/teams/tmsmenu.htm)
Posted by English at UNM at 6:55 AM No comments: 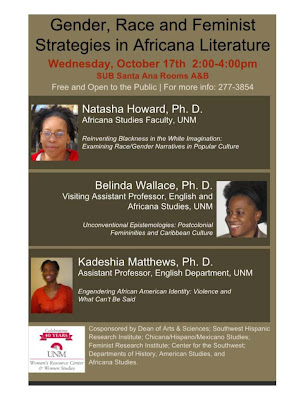 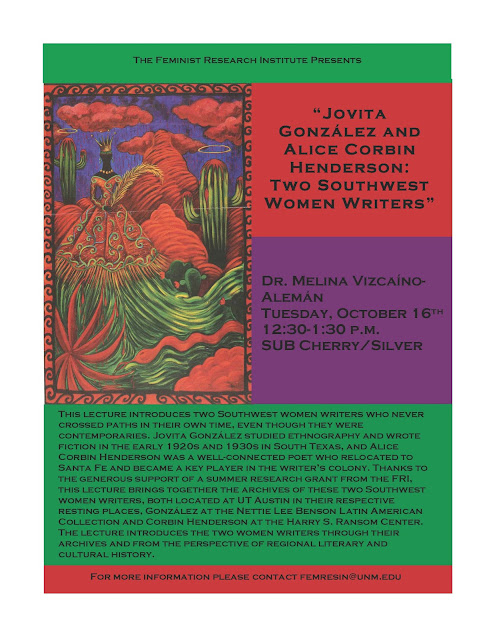 University of New Mexico
femresin@unm.edu
Posted by English at UNM at 7:03 AM No comments:

We have been busy . . . late spring and summer 2012 conference and public talks activities by our faculty and graduate students.

June 2012
Peter White taught in Austria in June for the AAECA Summer Program in which Austrian public school teachers learned about American education, language and culture in an intensive English only program. White taught the American Short Story and played the fiddle for dances at night
In June and July, White studied advanced violin making in Krakow Poland with his former teacher from 1980, Jan Pawlikowski

International Medieval Congress, Leeds, UK
Colleen Dunn, “Becoming Her Own Accuser: The Art of Courtly Love as a Commentary on Eleanor of Aquitaine”
Lisa Myers, “‘We be yemen of this foreste, under the grene wod tre’: Subversion in the Middle English Ballads of Robin Hood”
Anita Obermeier, “Sent Away, Sainted, or Self-Sainted: the Childless Queens Theutberga, Cunigunde, and Edith”

Council of Writing Program Administrators Annual Conference. Albuquerque, NM
Tiffany Bourelle, Cristyn Elder, and Chuck Paine served on the conference program committee.
Genesea Carter, “Cross-Institutional Collaborations: Peer Writing Groups and Writing Workshops”
Dan Cryer and Lindsey Ives, “Writing and Teaching Online—How Do We Assess and Maintain this Ever-Changing Environment?”
Beth Davila, “Multiple Perspectives on Directed Self-Placement in the Academy”
Cristyn Elder and Chuck Paine, “Broadening the Habits of Mind for WPAs and Students”
Annarose Fitzgerald, “I Didn’t Know This Was a Writing Class!: Fostering Connections Between Composition and Literature Approaches”
Christine Garcia, Danny Bogert, Natasha Jones, Genevieve Garcia de Mueller, “Why Mentorship Matters to Us: A Discussion of the Effects of (Under)Representation of Faculty of Color on Junior WPAs”
Lindsey Ives and Todd Ruecker, “Racism and Native Speakerism in the Writing Classroom”
Michelle Kells and Brian Hendrickson, “Accidental Tourists on the ‘Mother Road’: Route 66 and Other Metaphors for Navigating the Framework for Success in Postsecondary Writing”
Chuck Paine, “Delbanco’s Plea: What Does a Defense of Liberal Arts Have to Do with Writing Programs?” and “A New Stage for the NSSE Writing Questions – CWPA’s Continued Involvement”
Todd Ruecker, “Preparing Instructors and TAs to Serve the Emerging Majority”
Leah Snyder and Lindsey Ives, “A Roundtable of Ejournal Editors: Digital Spaces that Support and Expand Writing Program Goals”

August 2012
Peter White won second place in old time fiddle at the Santa Fe Fiddle and Banjo Contest
Posted by English at UNM at 7:28 AM No comments:

The 3rd annual Rudolfo and Patricia Anaya Lecture on the Literature of the Southwest features Taos writer John Nichols on Wednesday, November 7 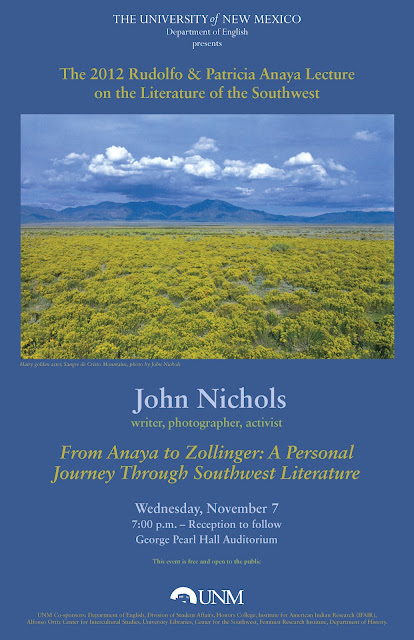 "From Anaya to Zollinger: A Personal Journey through Southwest Literature"

The lecture is free and open to the public, with a reception to follow. Books will be available for purchase at the event.

A resident of New Mexico since 1969, John Nichols is the distinguished author of 12 novels and 8 works of non-fiction. His most recent novel, On Top of Spoon Mountain, was published by the University of New Mexico Press in October of this year. Nichols has written the “New Mexico Trilogy” of novels—his classic The Milagro Beanfield War, The Magic Journey, and The Nirvana Blues—as well as a non-fiction trilogy about the Southwest—If Mountains Die, The Last Beautiful Days of Autumn, and On the Mesa.

“Much of my work has dealt with struggles for human justice, land and water rights issues, the clash between Chicano, Native American, and Anglo cultures,” Nichols writes. “My stuff is often polemical, usually comic. Laugh and the world laughs with us; weep and we weep alone.”

If you would like to support the Rudolfo and Patricia Anaya Lecture series, click here to give now.
Thank you! http://artsci.unm.edu/funding/index.html

Visitor Parking
Visitors may park at the UNM Welcome Center Parking Structure at a rate of $1.75 per hour. To get to the structure, turn north from Central Ave. onto Stanford Dr., turn right at the stop sign on Redondo, and enter the structure to your left.
The UNM Welcome Center Parking Structure is building 198 on the Central Campus Map.
(http://iss.unm.edu/PCD/campus-map.html)
Posted by English at UNM at 7:17 AM 7 comments: 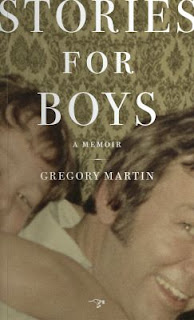 "STORIES FOR BOYS is a memoir and tells the story of my relationship with my father, who came out of the closet as a gay man after 39 years of marriage to my mother, and who came out to me after surviving a suicide attempt. The book also tells the story of how I came to share this change in the life of our family with my two young sons. I’m really grateful also that the book is now in its third printing and has been named a Barnes & Noble Discover Great New Writers selection for Holiday 2012."

You can see more about STORIES FOR BOYS on Greg's website here: http://gregorymartinwrites.wordpress.com/

The book is available at the UNM Bookstore, at Bookworks on Rio Grande, as well as on Amazon or Powells or Barnes & Noble. You can also purchase the book as an e-book, for the Kindle or the Nook.

Greg Martin will be giving a Reading, with a book signing to follow

on the UNM Campus,

Parking is close and convenient at the Yale Parking Garage, just a half block north of Lomas on Yale.

Greg's Upcoming Readings:
I just got back from a trip up to Missoula to give a reading and be on a panel about the memoir at the Montana Festival of the Book, and this week I’ll be reading at Powell’s in Portland, then the Wordstock Book Festival this weekend, and next week, I’ll be reading in Bellingham and Seattle and Salt Lake as part of the Utah Festival of the Book. If you know folks in those towns, and want to pass along that I’ll be up there, you can see the specifics of those readings on the appearances page of my website here: http://gregorymartinwrites.wordpress.com/appearances/
Posted by English at UNM at 7:35 AM No comments:

Julie Williams' article, "Romancing the Desert: Landscape and Ideology in Willa Cather's Death Comes for the Archbishop" was published in the fall 2011 edition of Plaza: Dialogues in Language and Literature.

Her paper, "Female Embodiment and the Western Landscape in the Story of Mary MacLane" won the Phyllis Bridges Award for Outstanding Paper in Biography at the SW/TX Popular Culture/American Culture Association Conference in February.

Julie also won the Feminist Research Institute's Graduate Student Paper Prize for the 2011-2012 school year. She is a PhD student in American Literature at UNM English.

Posted by English at UNM at 2:22 PM No comments: