On Thursday, October 23, the UNM Department of English will host the distinguished writer Ana Castillo as the featured speaker for the fifth annual Rudolfo and Patricia Anaya Lecture on the Literature of the Southwest. Castillo will speak at 7:00 p.m. in Room 101 of George Pearl Hall (the School of Architecture and Planning), with a reception to follow. The lecture is free and open to the public.

Ana Castillo is one of the leading figures in Chicana and contemporary literature. A celebrated poet, novelist, short story writer, essayist, editor, playwright, translator and independent scholar, Castillo is the author of the novels So Far From God and Sapogonia, both New York Times Notable Books of the Year, as well as The Guardians, Peel My Love like an Onion, and many other books of fiction, poetry, and essays. Her most recent novel is Give it to Me, and the 20th-anniversary, updated edition of her groundbreaking book The Massacre of the Dreamers: Essays on Xicanisma will be published this October by the University of New Mexico Press.

The UNM English Department established the annual lecture series on the literature of the Southwest in 2010 through a gift from the renowned fiction writer Rudolfo Anaya and his late wife Patricia Anaya. The annual Rudolfo and Patricia Anaya Lecture on the Literature of the Southwest features foundational figures such as Acoma Pueblo poet Simon Ortiz (2010), Las Cruces writer and playwright Denise Chávez (2011), Taos writer John Nichols (2012), and Kiowa writer N. Scott Momaday (2013). For further information, visit the Anaya Lecture Series website at http://english.unm.edu/anaya-lecture-series/.

Posted by English at UNM at 9:22 PM No comments:

Todd Ruecker published an article in the September 2014 issue of the flagship composition journal, College Composition and Communication.  The article is titled, "Here They Do This, There They Do That: Latinas/ Latinos Writing across Institutions," and focuses on how writing instruction was shaped across a high school, community college, and university by a variety of internal and external forces such as standardized testing pressures, resource disparities, and individual instructors.  The article is part of a two-part special issue titled Locations of Writing.
Posted by English at UNM at 9:19 PM No comments:

Brenna Gomez, an MFA student, also received a 2014-2015 fellowship, which is a joint initiative between the Graduate Resource Center and El Centro de la Raza.

The fellowship seeks to increase the representation of the Latina/o graduate and professional student community in academic and professional organizations. In addition to attending monthly graduate sessions and workshops, the program provides fellows with a $1,000 scholarship to support their research. Fellows also meet with a faculty mentor for intellectual support and advisement. Dr. Melina Vizcaino-Aleman, Asst. Professor in ALS, will serve as mentor to both Michael and Julian, while Professor Dan Mueller will serve as Brenna's mentor. Congratulations go out to all three.
Posted by English at UNM at 7:44 AM 1 comment:

Students were given the opportunity to have their work make a difference in the UNM community and in their academic portfolios. Eight student documents met all assignment criteria and were selected for the competitive opportunity. John Steiner and his COSAP staff chose the winner, Audrey Martinez. COSAP worked with Audrey over the rest of the semester and summer to complete the project. We are proud to announce that the UNM COSAP website has posted Audrey’s work. To see the work, please go to http://cosap.unm.edu/.  On the left side of the page, click Alcohol Poisoning? Save a Life and Click Here!

In the process, a mutually beneficial relationship with COSAP was developed. John and his staff came to the classroom and introduced COSAP's student-services and distributed a survey to help update their research on student substance abuse at UNM. In addition, one student reported that working on the assignment taught him how to act during an emergency and it helped him take care of a girl who had been binge drinking and became unresponsive. 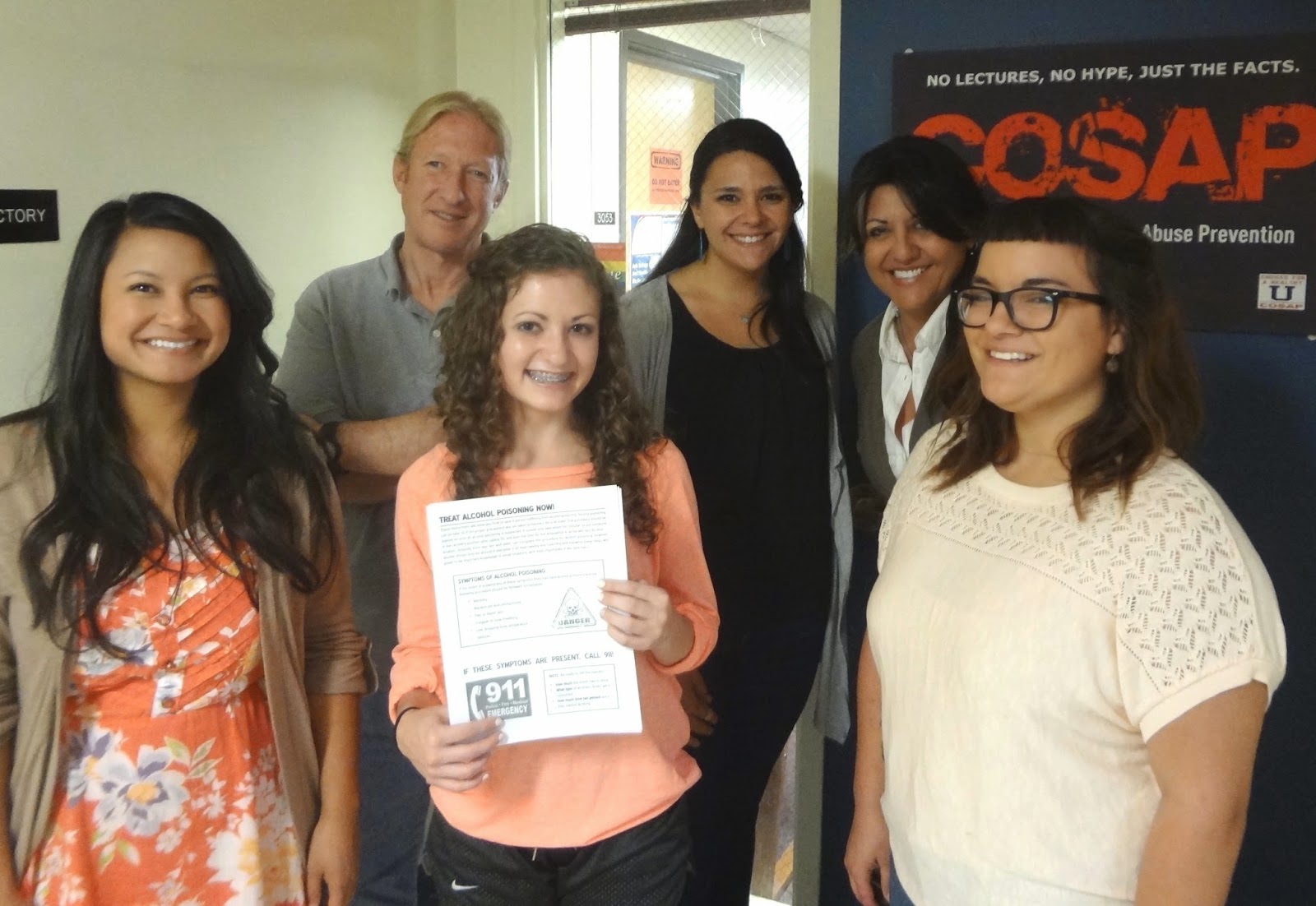 Posted by English at UNM at 7:41 AM No comments: