In her most recent article, “Merlin’s Conception by Devil in William Rowley’s Play The Birth of Merlin” (Arthuriana 24.4 (2014): 48-79), Anita Obermeier argues that Rowley’s early modern play amalgamates both the medieval Galfridian-based and Francophone narratives of Merlin’s conception by daemon, incubus, and devil in order to engage contemporary early seventeenth-century debates on the devil’s influence in the world, to ventriloquize social commentary via the figure of the Clown, and to have Merlin hail Prince Charles as the future Arthur.
Posted by English at UNM at 3:08 PM No comments: 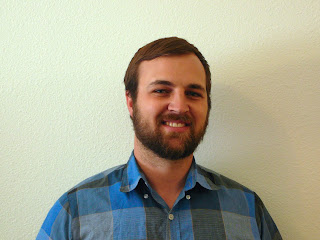 Baker earned both his B.A. and M.A. from the University of Missouri-Kansas City. In his master's program, Baker studied American literature, rhetoric and composition, while also serving as a graduate instructor, teaching and assisting with writing, literature, and film courses. Baker joined the UNM English Department in the fall of 2012. Baker’s areas of study include nineteenth and twentieth century American literature, Critical Theory, Marxist Cultural Theory, and Pedagogy. He also works as a UNM Graduate instructor in Core writing, a Freshman Learning Communities instructor, and teaches courses on American and World literature.

Baker will use the CRS Torres Fellowship to research and draft his dissertation, tentatively titled, “Literatures of Dispossession: Representing U.S. Settler Colonialism in the Late Nineteenth Century,” which examines how American literature from mid-nineteenth to the early twentieth century offers a cultural history of a key period in the development and expansion of U.S. settler colonialism. The dissertation highlights the role of settler colonialism as a structure of dispossession and its relationship to the processes of U.S. industrialization and monopoly capitalism. In particular, Baker focuses on the works of Indigenous, African American, and Mexican American writers of this period, demonstrating how the form and style of their writings register the uneven development and structural violence of settler colonialism and capitalist expansion in North America. Dr. Jesse Alemán directs the dissertation.

The CRS Hector Torres Fellowship, a $10,000-$15,000 stipend, was inaugurated in 2010 by the University of New Mexico’s Center for Regional Studies in memory of the English Department’s slain colleague. The fellowship supports graduate research and scholarship in the English Department directly related to the late Dr. Torres’ fields, as well as the mission of the Center for Regional Studies. Areas include Chicano/a literary and cultural studies; theory (i.e. Marxism; post-structuralism; deconstruction; psychoanalysis; and globalization); film studies; and scholarship related to the mission of the CRS, including history; archival research; literature; and other interdisciplinary fields related to New Mexico, the US-Mexico borderlands, and the greater southwest.
Posted by English at UNM at 1:44 PM 1 comment: