Oct 28, Friday, room 108, 12-1:30, a Reader's Theatre performance of Hugh Witemeyer's play on DH Lawrence in New Mexico, actors from our own faculty and student groups.

Bring your own lunch and Halloween treats will be provided.
Posted by English at UNM at 8:10 AM No comments:

516 ARTS and The Local Poets Guild present an evening of poems on the theme of Superheroes.

Hosted by Hakim Bellamy the event will feature poet Gary Jackson (MFA 2008) with current MFA candidates Bonnie Altamirano, Nick DePascal and Nora Hickey for a reading and celebration in the gallery.

Details can be found here
Posted by English at UNM at 8:09 AM No comments:

Summary: The Medieval Studies Program in the Department of English at UNM is committed to scholarship and teaching that are historically anchored and theoretically engaged. Successful candidates must have demonstrated scholarly and pedagogical excellence and have engaged in multi-disciplinary and multi-cultural research and teaching. Successful candidates will be expected to pursue active mentoring of students and to maintain a strong involvement with UNM’s Institute for Medieval Studies and its outreach programs in public education.

Preferred qualifications for the ideal candidate include significant record of publications, teaching excellence on the undergraduate and graduate level, demonstrated capacity to work cooperatively with faculty and students in interdisciplinary programs and community outreach, as well as secondary expertise and interest in one or more of the following comparative areas at the undergraduate and graduate level: Old Norse Language, Literature, and Folklore; History of the English Language; Feminist Approaches to Medieval Studies; Medieval Culture; and Anglo-Saxonism, the appropriation of Anglo-Saxon literature and ideas by later literary historical periods.

All application materials must be received by Nov. 21, 2011, for best consideration. The position will remain open until filled. For complete details or to apply, please visit: https://unmjobs.unm.edu/applicants/Central?quickFind=64967 and reference posting number 0813180.

Questions on this posting may be directed to Dr. Anita Obermeier, Search Committee Chair, at AObermei@unm.edu.

The University of New Mexico is an Equal Opportunity/Affirmative Action Employer and Educator. Women and underrepresented minorities are encouraged to apply.
Posted by English at UNM at 9:47 AM No comments:

The next English Department Colloquium will be Thursday, October 27, 12:30-1:45, in Humanities 108 (NOTE VENUE CHANGE). Dr. Kathleen Washburn will deliver her research presentation:

No advance readings for this presentation. See you there!
Posted by English at UNM at 6:55 AM No comments:

This is a prize for single poem, named in honour of a late Irish poet long associated with the Centre. The Gregory O'Donoghue International Poetry Prize will have a first prize of 1,000 Euro (on 5 September 2011 approx. USD 1430 or GBP 875) and publication in Southword Literary Journal. The MLC will subvent travel costs for the winner up to 600 Euro and provide hotel accommodation and meals for three days during the Cork Spring Literary Festival. The author who takes first prize will have the chance to read the winning poem at the Cork Spring Literary Festival in February 2012. There will be a second prize of E500, third prize of E250, and ten runners-up will each have their poems published in Southword and receive Southword’’s standard fee of E30.

The deadline is 18 December 2011 and this year's judge is poet Patrick Cotter. (http://www.patrickcotter.ie )

More information, including submission guidelines, may be found here on our website.

or via our Facebook group: https://www.facebook.com/odonoghue.poetry.competition
Posted by English at UNM at 6:53 AM No comments:

MFA student Elizabeth Tannen has had an essay published on Salon.com. Read the entire essay here: http://life.salon.com/2011/10/11/our_food_porn_romance/
Posted by English at UNM at 6:52 AM No comments: 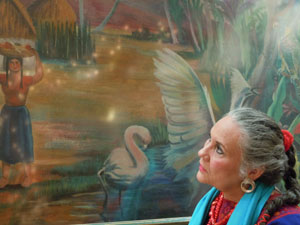 
On Wednesday, October 19, the UNM Department of English will host the distinguished Las Cruces writer Denise Chávez as the featured speaker for the second annual Rudolfo and Patricia Anaya Lecture on the Literature of the Southwest. Chávez will address the connections among Chicana feminism and borderlands literature at 6:30 p.m. in George Pearl Hall Auditorium (the School of Architecture and Planning), with a reception to follow.

A native of Las Cruces, Chávez is the author of numerous plays, short fiction, essays, and novels, including The Last of the Menu Girls (1986), Face of an Angel (1994), Loving Pedro Infante (2001), and A Taco Testimony: Meditations on Family, Food, and Culture (2006). Widely regarded as a foundational figure in Mexican American literature, Chávez is the recipient of the American Book Award, the Hispanic Heritage Award for Literature, the New Mexico Governor’s Award, and the Premio Aztlán, a literary prize for Chicana/o literature established in 1993 by Rudolfo and Patricia Anaya. In addition, she is the founder of the Cultural Center of Mesilla as well as the annual Border Book Festival, now in its eighteenth year.

This event is free and open to the public. There will be a reception following the lecture.

George Pearl Hall is located in the School of Architecture and Planning at 2401 Central Ave. NE, across from the UNM Bookstore. The Anaya Lecture will be held in George Pearl Hall Auditorium (room 101).

George Pearl Hall is building 195 on the UNM campus map.

Visitor Parking
Visitors may park at the Cornell Parking Structure at a rate of $1.75 per hour. To get to the structure, turn north onto Stanford Dr. off of Central Ave, go right at the stop sign onto Redondo, and enter the structure to your left.

Cornell Parking Structure is building 196 on the campus map.

Additional handicapped parking can be found at the parking lot behind Johnson Gym. For access, proceed on Redondo past Johnson Field and turn left at the stop sign in front of student housing; the road ends in a small parking lot.
Posted by English at UNM at 9:29 AM No comments:

American Literary Studies is happy to welcome Dr. Belinda Deneen Wallace as a Visiting Professor with a joint position in English and Africana Studies. Dr. Wallace received her Ph.D. from the University of Maryland, College Park (2006) and held a postdoctoral fellowship in UNM’s Africana Studies Program from 2007 to 2009. 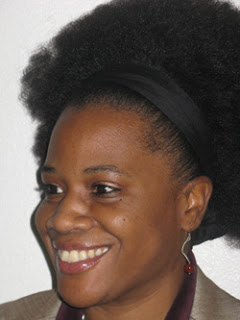 Dr. Wallace is a post-colonialist who specializes in contemporary Caribbean literature and culture.  As a postdoc fellow, she conducted archival research in Trinidad and Tobago, Grenada, and Jamaica in order to advance her research agenda on literary representations of Caribbean revolutionary moments, children’s games as cultural memory, and the role of gender and sexuality in Caribbean nation building. She is currently at work on two projects: an article on the works of Trinidadian novelist Dionne Brand and her book manuscript, Revolutionary Lyricism and the Myth of Female Docility, which examines Afro-Caribbean women’s roles in Caribbean libratory and revolutionary movements.

As a graduate student, Dr. Wallace was the recipient of innovative and dynamic teaching that helped demystify learning, re-contextualized the role of knowledge in her life, and bridged the gap between formal education and public intellectualism. These experiences shaped her as a student and now drive her as a professor. In 2010-2011, she served as a lecturer for the Africana Studies Program and worked for the Division for Equity and Inclusion, where she identified and addressed barriers to Black/African American student and faculty recruitment and retention.

Dr. Wallace teaches Caribbean Women Writers, People and Cultures of the Circum-Caribbean, Blacks in Latin America, 19th and 20th Century African American literature, and Black Feminist Theory. She will be teaching English 297—Later American Literature in Spring 2012.
Posted by English at UNM at 5:32 AM No comments: 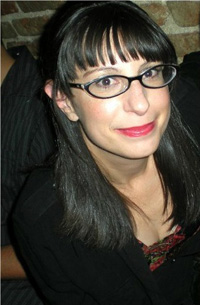 Natalie Kubasek, a second year doctoral student in American Literary Studies, has been named a recipient of UNM’s 2011-2012 Latino/a Graduate and Professional Student Fellowship. Sponsored by El Centro de la Raza and the Title V Resource Center, the $1,000 award seeks to increase the representation of Latina/o graduate and professional students within the UNM community. The goal is to serve as a support system by making resources, networks, and skills available for the successful completion of the graduate degree.

Also, her article, “‘The Ghosts of Ages Past’: Gothic Doubles and Traumatic Transformation in George Lippard’s ’Bel of Prairie Eden,” has been accepted for publication in Neo-Americanist: An Interdisciplinary Online Journal for the Study of America. The essay, which she penned in Dr. Alemán’s seminar on the American Gothic, argues that the gothic tropes that appear in Lippard’s 1848 sensational text emerge from the uncanny relationship that characterizes the border between the US and Mexico.

Ms. Kubasek joined the doctoral program in Fall 2010 after earning her MA in English from Simmons College, in Boston, MA, and her BA in English from Whittier College, in her hometown of Whittier, CA. Her focus is on Chicano/a Literature, and she will be writing her dissertation on Chicana feminist performance art and theater. Dr. Alemán chairs her Committee on Studies and will serve as her faculty mentor for the Latino/a Graduate and Professional Student Fellowship.
Posted by English at UNM at 9:17 AM No comments:

Marisa Clark's essay "Here Come the Brides," published in the Apalachee Review, was named a Notable Essay in Best American Essays 2011.  Congratulations, Marisa!
Posted by English at UNM at 10:14 AM 1 comment: